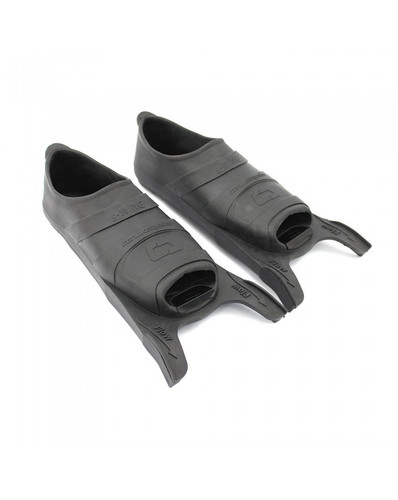 2) Sky-boot like: The design of the new s-WiNG footpockets include several high stiffness bands which are studied to hold the foot completely firm and constrained (from tip to big toe). This feature enable to better transfer the foot driving force reducing almost to zero dissipation due to rubber deformations.

3) High stiffness sole: The new s-WiNG footpocket has a stiffened sole, this avoid deformation of footpocket sole under blade load, enabling the use of all kind of blades. The blade pouch stiffness allows the blade to be perfectly constrained and to increase by 30% the efficiency of the any blade

4) Open flow system: the new s-WiNG footpocket is designed to canalize the water flow creating a channel beside the foot, this "without spars" system has been studied to optimize the hydrodynamic efficiency.

5) Twinzer system: The new s-WiNG footpocket is designed with two vertical stabilizers which avoid the sideslip motion, also enabling to canalize water in an effective manner.

6) Anti-twist System: the front structure of s-WiNG footpocket is designed with a higher stiffness U-shape reinforcement to stabilize the blade thus avoiding rotations in longitudinal axis.

7) Comfort: the new s-WiNG footpocket has been designed to maximize comfort by wrapping and following the foot shape of the foot anatomically, this thanks to 7 size available from 35 to 48.

9) No Weight material: Material used for s-WiNG footpocket is an innovative rubber blend combining the high elasticity of natural rubber with durability of thermoplastic rubber. The  results is a material density of 1.05 (grams/cubic centimeters) which means no weight in the water.

Size [mm] of footpockets for choosing the size